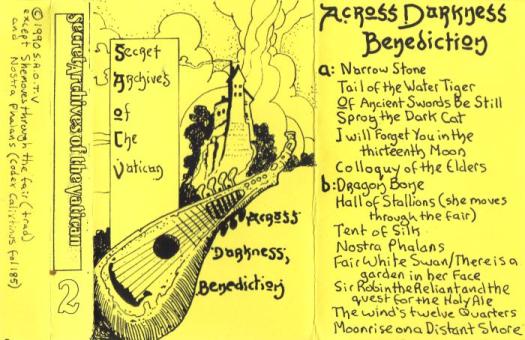 Secret Archives of the Vatican has been around for a long time – and they are still going today. Their music today is released mostly on their BandCamp page, but back in the 1990s it was all cassette demos. As you can see by the titles above, this is a very unique album. SAotV is known in electronic circles for mixing in all kinds of world music influences into their electronic music. These earlier cassettes seem to be a bit more ambient than the current music, but still very unique and full of world music influences. This was their second tape – I think after the third or fourth they stopped numbering them. I have heard a few later tapes and of course everything on BandCamp as I am a big fan of theirs. I hope to track down the rest of their music soon. An interview on Cross Rhythms digs more into what this band was about at about the time this tape was released.

Missing Information: Who played what on this.