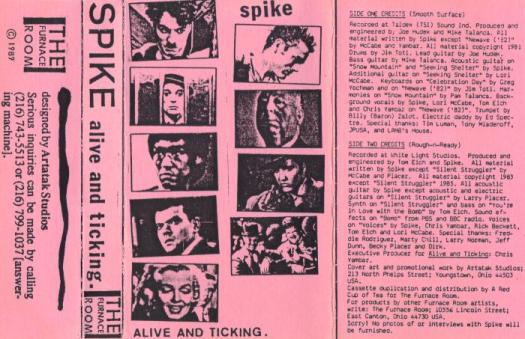 So this is the first demo by Spike (aka Terry McCabe). If the songs titles here sound familiar – it is because all but one of them re-appear two years later on 1991’s Asphalt Invasion. Asphalt Invasion adds a prelude and closing song both called “City Portrait.” The only song on this demo that is not on Asphalt Invasion – “Silent Struggler” – is also on 1993’s Three for All. I will need to go back and see if the songs on here are different versions of the ones on later demos – I seem to remember those being more acoustic-based, while this one has a good amount of rock, alternative, and (of course) new wave. I still love the song “New Wave” – just wish there were a lot more like it. That is not knocking the other songs – there are good songs in other styles on here as well. I would have just liked a full new wave album by Spike is all.

Update: after comparing them, I believe the songs on this tape are the same versions as the ones on Asphalt Invasion. “Silent Struggler” seems to be a similar, but slightly different version of the one later on Three for All.