This was actually sent to me a long time ago as a CD burn of the tape. I dug it out and decided to clean it up a bit. This was basically their second demo, after a 1993 tape called Bozur (which I don’t have). After this tape, they were signed to Tooth & Nail Records to release their full-length debut Super Deluxe in 1995. The sound here is kind of a mix of dreamy indie pop, shoegaze, and romantic modern rock. They went pretty fuzzed-out and shoegazer on their label debut after this. But I know that some of the songs from this demo, especially “Oceania,” made it on to several unsigned bands compilations back in the day.  Only two of the songs here (“Lush of Spring” and “Oceania”) made it on to Super Deluxe. A great debut from a band that went on to bigger things.

For some reason, I was expecting this to be metal. But it starts off kind of like a gothic alternative rock band with pop sensibilities. Also a bit of romantic modern rock leanings. I kind of like it, and I know there are better ways to describe the sound, but my mind is blanking right now. They grow a bit more pop-oriented as the songs progress, but there are three great songs here if you like well-written songs. The third song is almost a bit heavier version of euro-pop even. If you remember a band called Millions & Millions, they remind me a bit of a more alternative learning version of that band. Not much info about the band other than what is on the card above, so I don’t know much of where they went after this.

Missing Information: Who played what on this? What year was it released?

This is another demo that was uploaded to YouTube. The Deluxetone Rockets signed to Tooth & Nail Records and released their label debut in 1999. At some point before this demo they are said to have been a punk band, as well as going under the name of Between Thieves at some point (not to be confused by the Texas band formerly known as Judah that signed to Tattoo Records). But at the time of this demo they were fully into their swing revival / rockabilly sound. All of the songs here were re-recorded on their self-titled debut except for “In Your World” and “Mexican Stratocaster.” The embed of the playlist is below, but be warned it is pretty distorted. The tape has a the standard lower production quality that you see with many demos, but you can also hear the distortion of streaming audio on top of the distortion of a lower mp3 bitrate being uploaded to YouTube (just my two cents: consider uploading YouTube songs at 320kps no matter how bad the tape sounded).

Another demo shared on YouTube – I wasn’t sure what this would be before listening to it, but it turned out to be rock with some alternative rock leanings. It kind of starts off like a slightly mellower Undercover and then chills out more after that. Which is not necessarily a bad thing, just the direction it generally goes in. Not sure what else Doug might have done after this, but I guess we can assume that all instruments were by Doug since no one else is listed? I have seen a demo by Doug Oxford & The Yearning,” which I assume is the same person. 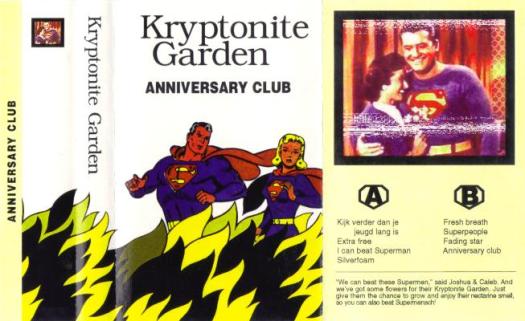 The sound coming out of the speakers definitely seems influenced by Morella’s Forest, Velour 100, and 90s Starflyer 59 (“Anniversary Club” sounds like a Gold outtake). However, it really leans more towards 90s indie rock than going full-on shoegazer. Plus, a strong influence of European alt rock as well, which makes sense since the band in from the Netherlands. They went on to sign to Sally Forth Records and release two full-lengths for them. You can see the potential on this demo. Half of the songs here made in onto their Sally Forth debut Extra Free in 1998, leaving “Silverfoam,” “Superpeople,” “Fading Star,” and “Anniversary Club” as exclusive songs to this demo. You might also notice there is a Superman theme to the songs and artwork.

This is a rare vinyl that was shared with me recently. This is pretty much an compilation of Seattle area bands from the early 1980s. The main historical interest is that members of two these bands went on to form Bloodgood. Nothing on here is near as heavy as Bloodgood, though. Side 1 is mostly adult contemporary and light rock. Side 2 brings more of the alternative and rock. Serviceman is described as progressive music, still on the pop side, but definitely not adult contemporary. Cypress is the band that Michael Bloodgood was in with his wife before he decided to form Bloodgood. They are probably the heaviest on the compilation, but still barely hard rock. Crystal City Rockers is the band that David Zaffiro was a part of before joining Bloodgood. They describe themselves as new wave, which is pretty accurate – but I can’t help noticing the raging near-metal solos from Zaffiro. FYI – Les Carlsen was in a hard rock/new wave band called Sticker before joining Bloodgood as well – but obviously not on this compilation.

This is an early demo that featured Dan Zimmerman, who now works as a solo artist (having released some albums for Sounds Familyre) and painter. This album is kind of an interesting mixture of blues, rock, alternative, and jazz. Zimmerman’s bio describes it as art-rock/punk, but it is generally more laid back than most punk. But that description still fits. Kind of hard to describe, but I like it. Sometimes the vocals are sung, other times they are almost spoken in a skit-like manner. You can hear the roots of the vocals styles he would use on later solo albums. Seems like it was five more years until they released their next album Right on Target in 1989, and then another 5 years before releasing their final album When Dinosaurs Melt in 1994.