While this looks like a really long album, most of the tracks are under 2 minutes long – many being less than a minute. Only two barely clock in over 2 minutes. This is mostly a spoken word project. There is music underneath the words, but mostly as sound effects and ambiance. Occasionally something like “Monkey Puzzle Tree” comes blaring out with near-punk intensity… but only lasts 43 seconds. There are also songs like “Music as Music” which has a kind of… circus-like alt rock groove under the spoken words? As you can see from the song titles, the song themes are all over the place. This is from the same label that brought us acts like Face in the Crowd and Griff.

This appears to be the first version of this tape (it was re-released on Corpqii Music in 1991 with two new tracks added to each side). The sound here is an eclectic mix of music, spoken word, found samples, sermon outtakes, and other assorted weirdness. This ranges from “Newave” (a full-on song by Terry) McCabe), to songs like “Phone Tag (Acid House Dance Mix)” (a collection of phone messages played over an electronic/industrial/new wave music scape), to songs like “Easter Eggs” (an excerpt of a sermon with no music). The packaging for this version is also much more extensive than the re-issue – the cover is a full page of paper folded down to a j-card, with a lot of liner notes and a full drawing on the back. There is also a signed insert and business card packed in there as well. As far as the songs, it seems that these versions are mostly the same as the ones on the 1991 version, except those versions sounds a bit remastered. 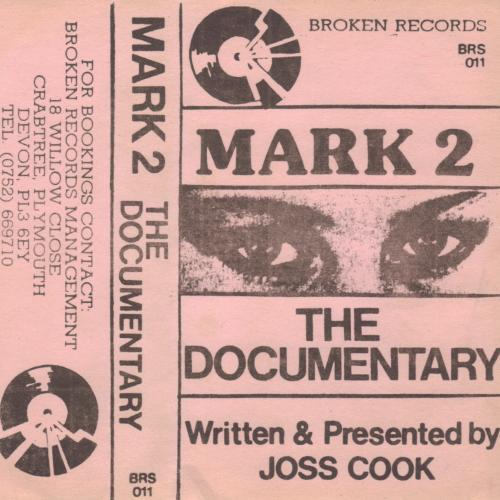 Wasn’t sure what this was going to be going in to it, especially once a Larry Norman song started playing. However, that song was a set-up to start this audio documentary of the Mark 2 band. Mark 2 is a new wave band led by Steve Wheeler of Broken Records (UK) fame. This documentary is mainly interviews with the band and various people involved with the band. There is also a section that follows the band through problems they have setting up a gig, complete with live recordings of conversations. It really sounds like a documentary, only an audio-only one. The only downside is that there are just snippets of songs that play here and there – no full songs, or really even long enough parts to give you a good idea of their sound. Norman Barratt even makes an appearance on the tape when Mark 2 opens for his band.

Missing Information: When was this released?

Now for something completely different. This is a tape of poetry written by Richard F. Hay, Sr., read by Hay in his Boston accent, and recorded over  keyboard / electronic / experimental / alternative music played by Marc Plainguet. Each track listed above is actually a collection of several short poems, with the  track name describing the general theme of all the poems in it. You can see the full list of poems above. The background music also changes with each track. Its rather interesting and engaging stuff, as Hay talks about his life, his time as  soldier, working as a fireman, and his family. This is technically the same general approach that Steve Scott takes with his poetry, but Scott and Hay showcase how there can be very different ways of doing the same general idea.

This is a mysterious compilation from Stride that serves up several songs from mostly noise/industrial/experimental bands – with a few exceptions. So who is on it? First off is Pacific 231, a noise/experimental project by Pierre Jolivet of Paris that has been going since the early 80s. If the band name sounds kind of familiar to you, Pacific 231 has been on some split albums with Psyclones, also an early noise/industrial band that was composed of Brian Ladd (aka Blackhouse) and Julie Frith. I can’t find these songs listed on any Pacific 231 releases, so they might be exclusive to this comp? I can’t find any information on The Dangerous Bros, but they appear to be an experimental free-form band with guitars. Vox Populi has also collaborated with Pacific 231, but is a band from France that has been around since the early 80s. They have an experimental noise sound as well, with some vocals and instruments. Face in the Crowd has released many tapes in the Christian tape underground, usually of a more experimental band sound, with some spoken word parts, some sung parts, random instrument playing, etc. Griff has also been featured here before, but he is experimental folk rock with an extreme British sense of humor. Don’t know much about Celestial Orgy, but it seems they only have compilation appearances listed on Discogs. They appear to be the closest thing to a rock band on here – definitely some alternative guitar and drums, but still more experimental than most alt rock. When they hit the high pitched vocals, it almost reminds me of Danielson. Inlaws and Outlaws is another band I can’t find much on, but they also are the most traditional industrial/electronic band on the compilation (although many others use industrial elements).

This tape basically serves as a compilation of all of Scottie Joel Cooper’s work up until this point, with some new tracks added. This was released jointly with Key Records, so it probably saw some circulation in the tape underground. None of the tracks here are named, so I did my best to match the names here with those from past projects. In some cases it was hard, as some tracks have been split up into smaller pieces and spread out. It was a long process to digitize this one, as each side is 45+ minutes long. Since many of the songs on here are a tape copy of a tape copy, there is significant tape buzz on most tracks. But every one of Cooper’s solo tapes, Dethdoor, and Timigen are all represented here – along with many new tracks such as a rap track set to a Michael Peace accompaniment track. 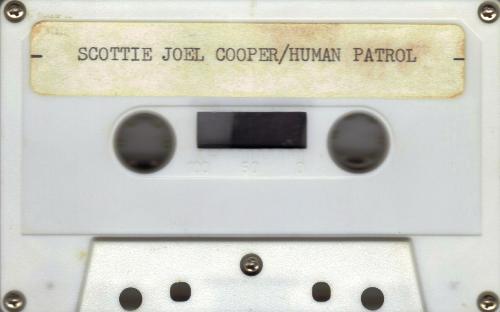 This recording was on the back of the Dethdoor – Beyond Death master tape. It is an unreleased project by Cooper. Some of the songs here are covers of earlier ones. This tape is mostly spoken word, with some instruments, found noise, sound effects, and other sounds in the mix as well. There were no track titles with this tape, so I took a guess at the song titles. “Come Into the Presence of the One” is a new version of the track I called “Metaphysical” on his X-Perimental Poetry tape. 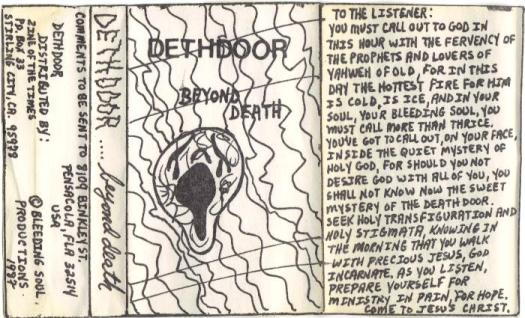 This is probably the most well-known release by Scottie Joel Cooper, since it made it into the tape underground thanks to Jeru-Slam Records. I was sent a copy of the original master tape that appears to differ in a few places from the label release. First of all, it has a track list on the inside, so that really helps with the track names. It also has an unreleased album by Cooper on the back. Also, the track “This is For You” is not on the label release. You get the first words “This is for” and then it cuts right to “Hellfire.” Also, the song “DeathDoor” is two parts on the label release (the song and then a child reading the Lord’s Prayer), but it is three parts on this tape (the song, The Lord’s Prayer, and then a spoken word poem about Death Door). There is an unlisted track after “There is Hope” on the master tape, as well as 7 minutes of Cooper talking about the Orthodox Church and why he has chosen to go that path in his beliefs. The sound here is an interesting mixture of spoken word, noise, and industrial elements. Some songs are pure spoken word, while others have interesting metallic beats as a backdrop. Also some bits and pieces of found noise here and there. The only difference between the covers of the label release and this master tape is that someone wrote “Jeru-Slam Records” in blue ink next to “Distributed by:” (and they didn’t include the list of song names).

This is more experimental sounds and poetry from Scottie Joel Cooper of Dethdoor fame. This one is much shorter than the other one. It is basically Scottie singing U2’s “New Years Day,” a quick poem, then Scottie singing “Amazing Grace,” and then a longer track of rhythmic bells ringing, various noises, and spoken word/poetic interludes. It may be separate short poems with musical interludes, or the same longer poem with musical interlude between verses. Hard to tell. I put it as one track called “Let the Voices Flow Within Me” because that was the first line… but it also kind of fits the track as a whole. The two singing tracks seemed to have others at least present for the recording – if not contributing to the song, so there might be others involved on this recording as well. The second track I also took a guess at the name. 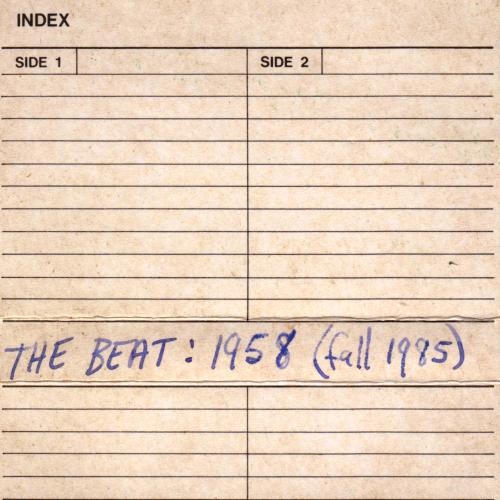 This is another tape sent in along with Timigen of unreleased music. I’m not sure if I should include these here, but one of the tracks here did make it onto Jeani Bond’s New Generation Tape Show back in the day. There were no track names here, so I came up with what I thought could be possible titles. Part of the track I called “Metaphysical” was played on New Generation. There are basically four types of tracks on here:

Some of the acapella songs may also be covers of songs that I have never heard of. The sermon might have been on the tape before it was taped over. The interview with Glenn Stanton is particularly disturbing, as he basically said he supports the bombing of abortion clinics, proving he is not truly “pro-life.” Scottie went on to record the Dethdoor tape, which gained wider distribution.