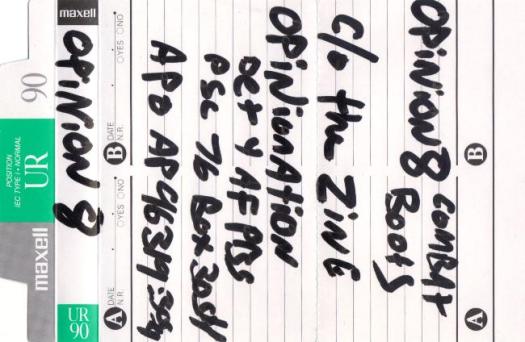 This tape follows in the footsteps of Don’t Quit You Day Job with experimental music mixed with spoken word and comedy skits. (Or maybe it came before that one and it blazes the pathway?) The music has a lot more structure and melody than you find in most experimental music, but it still heads a bit outside of typical alternative rock formats. No song titles were given, so I named the tracks based on what they seem to be talking about most. However, some tracks (like the third one) are mostly instrumental with a skit or spoken word intro/brief section. So who knows what the songs were really called? I am assuming that this is still just Joe Wallace on this tape as well, but that could be wrong.

Missing Information: Song titles, release date, did anyone else play on this?

This tape is a bit different, even from those that are a bit different. The credits thank IDY and other experimental bands, and there is a noticeable influence of these bands on the music. But there is also a strong sense of song structure that is alternative rock in nature. It comes across as a more experimental Crazed Bunnyz or a more alternative rock leaning IDY. It looks like Wallace is responsible for the played and electronic instruments. I kind of dig it, and it sounds pretty original to me – but maybe I don’t know the experimental underground as well. Are you wondering about the title of the last song? It pretty much describes what actually happens to the song. There is also another un-dated demo from before or after this one called Combat Boots.