Surprise Surprise shortens their name to just Surprise, and start getting closer to their sound on their label releases. However, this demo still has some mod / neo-psychedelic influences. Side 2 of this is probably one of the most trippy awesome sequence of songs ever on any Christian album. The first song is literally what it says: sitars and drums. Then they cover the Beatles ode to LSD (no kidding). Then is an even trippier song about acid trips – but discussing the dangers of acid trips. Then, is case they might have offended any Christians or hippies, they cover “Happy Together” by The Turtles. Then they close it off with the Lord’s prayer to prove where they stand (I assume). Alex MacDonald is the only member listed on the tape, so I am unsure who else is on this release.

Missing Information: who played on this tape? 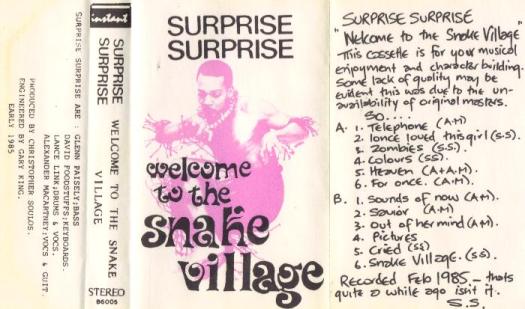 This band started off as Surprise Surprise, then shortened their name to just Surprise, and eventually signed with Refuge records and released two full length CDs in the late 80s. This early demo is pretty different from their later releases as Surprise. Some songs sound like the soundtrack to the Monsters TV show (especially the song “Zombies”). I think they used to call this sound “Mod” or “Neo-Psychedelic”? I may have that part wrong, but it still sounds pretty cool. Power pop/alternative guitars with trippy keyboards and smooth background vocals. The song “Zombies” is listed as “Walking with a Zombie” on the cassette itself, and it had been previously released on a single the year before as the B-side to “Anguished Heart.” Also of note is that “Cried All My Tears” was released as a single, with “Telefone” as the B-side the next year after this was released. After that single, they shortened their name to Surprise and released the Good Guys Don’t Always Wear White demo.