I had previously posted about this demo, but didn’t know much because it had no cover. Then a copy with the cover and details showed in the box, so i am re-posting with the new cover. This is TNK’s second demo after The Noble Knights.  The sound here is commercial metal with a slight leaning towards power metal. The lead singer reminds me of Paul Stanley here and there – maybe mixed with a bit of the Heaven’s Edge vocalist. All played over some well-played and written metal that would have fit in well on the Sunset Strip (maybe just not the glam-metal-only venues). The guitarist is the only member here that was on their 1986 demo at this point (no drummer in the band pic, but they do thank the drummer from the last demo for doing the drums here). Also of note that there is no date on this tape, but most sources place it as 1989. Gotta love the 80s cover with a woman that literally looks like a Sara on the phone. 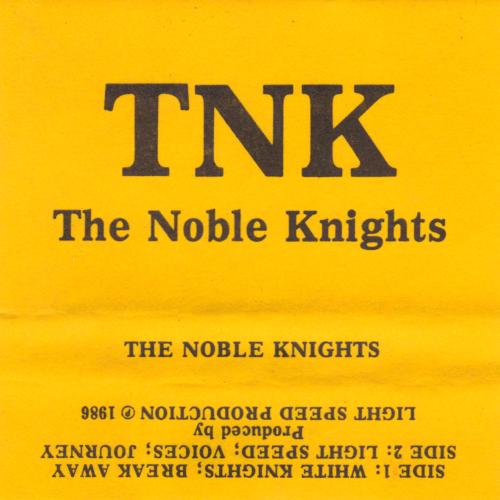 The first demo by TNK, sometimes called The White Knights (even though it was either self-titled or The Noble Knights depending on where you look on the tape itself). This is a bit rougher than their next demo Sara’s Callin’, but still a good starting point. The sound is mostly traditional metal with a slight neo-classical metal influence. It seems like the drummer and guitarist are the only ones that stayed in the band by the time they recorded their next demo. Like their second demo, this one also ends with a short guitar instrumental.