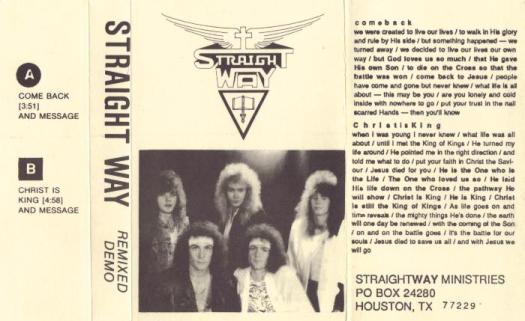 This is a shorter demo from the band that went on to release the One Way to Heaven demo and then the Black or White CD. Both of the songs on here re-appear on both of those releases. They question is: which demo was remixed? Was it just the two songs, or were these two taken from a longer demo? The messages of on each side that follow the songs are not really that deep, but represent what passed for “messages” back in the day. Note that David and Damon are the only two members listed on the tape – the rest are assumed based on the next demo. Most of the songs you can listen to on YouTube: 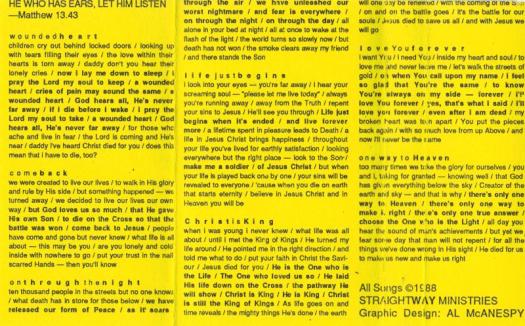 I kind of saw this one and set it aside after digitizing their Remixed Demo tape, as I thought it would be another re-packaging of songs from their more well-known Black or White demo. That is only part true actually – it seems to be an earlier, longer demo. Some songs re-appear on Black or White, while many are only on here. I don’t see much information about this one online, but it is the same band. Very competent late 80s metal, leaning a bit towards the traditional metal side, with some good chugging songs as well. Seems to be a Houston band with connections to King’s X and Galactic Cowboys (same church, but not the same sound). The tape I transferred was a bit rough in places – dropping out during one song and warbling noticeably on another. Too bad, but that is what happens as tapes get older.  For those that are counting, “Come Back,” “Wounded Heart,” and “Christ is King” make it on to Black or White. “On Through the Night,” “Life Just Begins,” “Love You Forever,” and “One Way to Heaven” are all only on here. “Come Back” and “Christ is King” are the two songs on the Remixed Demo tape from… 1987 (along with two testimonies after each song on each side). So I guess that means there was also an earlier demo that was remixed? Black or White was 1989. Ahh – I see they may or may not have had a demo from 1987 called In the Nic of Time. But neither of those songs are on there? Such is the way the tape underground goes – missing pieces, or odd pieces that don’t fit, probably because the band made a decision that no one else was privy to.